Angels Among Us – Meet the Westside Family

Angels Among Us – Meet the Westside Family 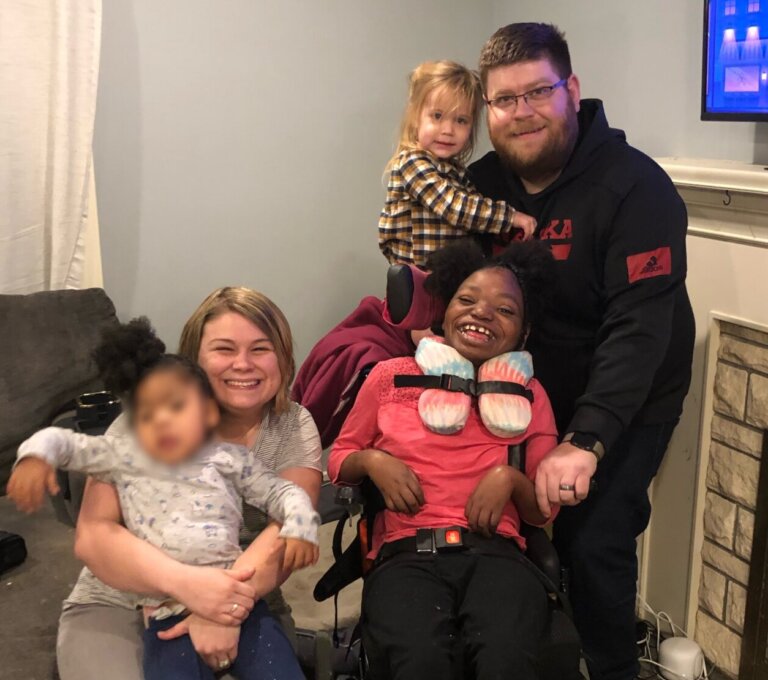 Heather and Mitchell knew they wanted more children, but emergency surgery following the birth of their daughter Celina, nicknamed CeCe, prevented that from happening. Surgeons had to perform an emergency hysterectomy. But it didn’t deter the couple from welcoming more children into their family; it merely altered the path.

The couple, who moved to Omaha from the Grand Island area after their marriage, thought becoming foster parents would allow them to bring more children under their roof in the Westside area. The opportunity to be foster parents for children with disabilities sort of fell into their lap, Heather said.

After talking with a friend about foster care, she learned about “G,” who was facing being moved into a nursing home for care after her older sister could no longer provide the in-home care G required. Heather jumped into “Tiger Mom” mode.

“I couldn’t see a 12-year-old forced into a nursing home,” she said.

She and Mitch discussed what was required to immediately become foster parents. They welcomed 12-year-old G to their home shortly afterward.

Two years later, the couple are permanent guardians for the teenager. As a result of cerebral palsy, G is non-verbal and non-mobile, and uses a wheel chair.

Non-verbal doesn’t mean non-communicative. G uses a Tobii Dynavox device to communicate with her eyes. About the size of an electronic tablet, a camera follows her eyes to choose a subject or word, such as “Hi,” “Yes” and “No.” She enjoys playing an underwater fish game on the app.

The foster parents have expanded G’s social scene, as she attends a day care program at J.P. Lord, as well as participating in cheerleading and the “Miss Amazing” pageant. G smiled as Heather put her tiara on top of her head and showed off G’s trophy.

With five siblings, G maintains a relationship with her biological family. Her biological mother died, and one of her older sisters – G is the youngest in the family – cared for her until it became too difficult. Rather than move into a nursing facility, Heather and Mitchell stepped in to help.

The couple have welcomed about 10 foster children into their home over the past two years. Not all have been special needs, Mitchell said. They seem to be drawn to children who may need more care. Part of that may be Heather’s career as a nurse. As a Licensed Practical Nurse (LPN), she has worked in hospitals and understands the care required of people with special medical needs.

Their affection for children with special needs continued when they welcomed two-year-old  “Chris” (not her real name) to their home in 2020. The child has a progressive genetic neuromuscular disorder, as well as scoliosis. She is also non-verbal.

When she arrived, the two-year-old wasn’t walking. Two years later, Chris is a speed demon, quickly moving from one spot to another, keeping her foster parents on their toes, Heather said.

With three girls in the house, the couple, who have been married about seven years, seem blissful.

However, just like any other parents, Heather and Mitchell appreciate their alone time. The couple have been fortunate to have their own “village” to help care for the children, including her mom, who is also a medical professional. The couple enjoy date nights once in a while, allowing them to recharge their batteries and refocus on the care of their children.

While they know they’ve been blessed with a great support system, they understand the need for an overnight respite program, such as Asha’s House, can offer to them and others.

Born in Omaha, NE, Sherri obtained her Bachelor’s degree in Elementary Education from Dana College and Master’s degree in Educational Technology from Peru State University. She has worked in Title1/Chapter 1 education and spent the last twenty-seven years in Administration and Sales in Real Estate. She is a happily married woman with five children, one with special needs.